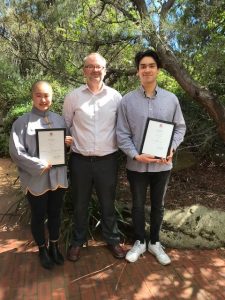 IPAA Tasmania  Student Awards for the 2017 academic year being presented to Chun Yu and Noah Grubb by Dr Matt Killingsworth, Head of Discipline, Politics and International Relations, University of Tasmania.

Members of the Royal Institute of Public Administration Tasmania (now IPAA Tasmania), officers of the State Public Service, and friends and associates of B.J. Thompson, Esquire (former Public Service Commissioner for Tasmania) wanted to record their appreciation of his work in the field of public administration. They donated a sum to endow a prize in his honour, in public administration. The University Council agreed to the foundation of a prize in 1966.

IPAA Tasmania Prize – for Introduction to Politics and Policy